Just added to your cart

6 Top Tips to use this Ramadan

The very first verse of the Quran was sent down during this holy month, and before it came to be known as the month of fasting, the companions knew it to be the month of the Quran. To be able to read the Quran is an honour that has been bestowed on mankind, and often many of us fail to realise this significance. It is said that the companions would spend 6 months in preparation for this blessed month which is better than a thousand months.

So how can we as muslims utilise this great opportunity? The obvious answer is the Quran. The benefits of reading the words of Allah are immense, some of which you may have not been aware of before.

One, it will act as an intercession for us on the day of judgment

"Abdullah ibn `Amr reported that the Messenger of Allah (saw), said: "The fast and the Qur'an are two intercessors for the servant of Allah on the Day of Resurrection. The fast will say: 'O Lord, I prevented him from his food and desires during the day. Let me intercede for him.'
The Qur'an will say: 'I prevented him from sleeping at night. Let me intercede for him.' And their intercession will be accepted." [Imam Ahmad]

Two, the Quran is a complete guidance for us. We sometimes feel lost and in this state sometimes we forget the answer is sitting waiting to be opened on our shelves.

“The month of ramadan in which was revealed the Quran, a guidance for mankind and clear proofs for guidance and the criterion.” (2:185)

Three, It has healing benefits for not only those affected by black magic and evil eye but also physical illnesses.

"And We send down of the Quran that which is a healing and a mercy to those who believe (in Islamic Monotheism and act on it), and it increases the Zaalimoon (polytheists and wrongdoers) nothing but loss" [Quran Al-Isra’ 17:82]

Four, it gives our hearts tranquillity and peace.

Allah says in Surah Al Ra’d, "Verily in the remembrance of Allah do the hearts find rest" [13:28]

The prophet (SAW) used to say in his Du’aa;

Six, to increase our Iman.

Allah says in Surah At-Tawbah, "And when a surah is revealed, some of them ask “which of you did this increase him in Iman?”. As for the ones who believe, it increased them in Iman and they rejoice" [9:124]

Unfortunately, the majority of us do not have any relationship with the Qur’an. Since we are in Ramadan, the blessed month of the Qur’an, and the devils have been chained up, now is the opportunity to change. Bear in mind It is important to not push yourself to do too much, otherwise, you’ll end up right back where you started - not reading the Qur’an at all. Now what are the practical ways we can gain these benefits and actions that we can sustain.

The First Command and word of the Qur’an was “Read!”. So first and foremost we should Read the Quran. If we can't read it, the minimum we can do is listen to it, even if it is only 5 -10 minutes every day.

“The most beloved deeds to Allah are those done regularly, even if they are small.”

It is good to recite the Qur’an, even if you do not understand it, but the ultimate purpose of its revelation was for us to imbibe its teachings and incorporate them into our lives. So maybe start as Umar did, by implementing an ayah everyday for 30days. Everyday select an ayah and implement it that day and for every day after that. That way inshallah we will gain 30 new habits or remove old ones.

Read the ruqyah and a manageable amount of the Quran after fajr every morning.

Establish prayer at the decline of the sun [from its meridian] until the darkness of the night and [also] the Qur’an of dawn. Indeed, the recitation of dawn is ever witnessed. [17:78]

Try to study ten verses a day. This is based on the narration of Ibn Mas’ud that the Companions used to learn the Qur’an ten verses at a time.

Jazakallhu khairan for reading this. If you found this helpful, join the family to receive updates, blogs, product releases and more. Make sure to leave a comment below. Ramadan Mubarak!

Don't take our word for it!

I ordered a Quran Moon Speaker as a Ramadan gift for a friend and she absolutely loves it. She adores all the different features, the changing colors, and she's looking forward to using not only during these last ten days of Ramadan but believes it will be a useful tool throughout the whole year.

Salam! We're really sorry to have missed your note and thank you for the feedback and giving us he opportunity to make it right for you.

Recieved this quran moon lamp as a gift and from the moment I saw it I couldn't wait to use it. The packaging withing the box is just perfect and elegant. The quran moon lamp is unbelievable comes with blutooth connection, mp3 with a few nasheeds, quran recital by many sheiks/qari , salat method and much more. Compared to most moon lamps this moon lamp is high quality and very strong! Comes with a remote which works from a distance and when playing lightens the room up leaving a very relaxed and peaceful vibe. Love It!

Bought this moon lamp as an upgrade as I seem to have an obsession with Moon lamps, and it just blew me away! The sound quality, the fact that it was controlled by an app and a remote and just looked so beautiful in my Ramadhan corner. I loved it so much I purchased another one straight away to gift to my best friend who claimed "it's the best gift anyone could ever give me". The amazing, friendly atmosphere by the Andulus team means I would not hesistate to purchase again in the future! 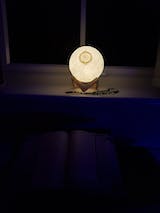 Best purchase! I just wanted to say thank you to this business for such a brilliant service and an amazing product. I bought this as a birthday present for a friend and it came on time and wrapped so beautifully with a personal touch.